What do your kidneys do?

Your kidneys are vital for your survival. Their main functions are filtering waste from your blood and balancing levels of salts, minerals and water, which in turn help to regulate your blood pressure. They are also involved in activating vitamin D to a form that your body can use to absorb calcium from food, thus keeping your bones strong, and in the production of red blood cells.

Where are your kidneys?

Your kidneys are on either side of your spine, below your ribcage and behind your belly. If you put your hands around your hips and then slide them upwards until you can feel your ribs with your fingers, your kidneys are at the back, under your thumbs. You cannot feel them, but they are there, well embedded in your body. Most people have two kidneys, but you can live normally with only one. This is why it is possible to donate one for transplant into someone else. Your kidneys are bean-shaped and roughly fist-sized. 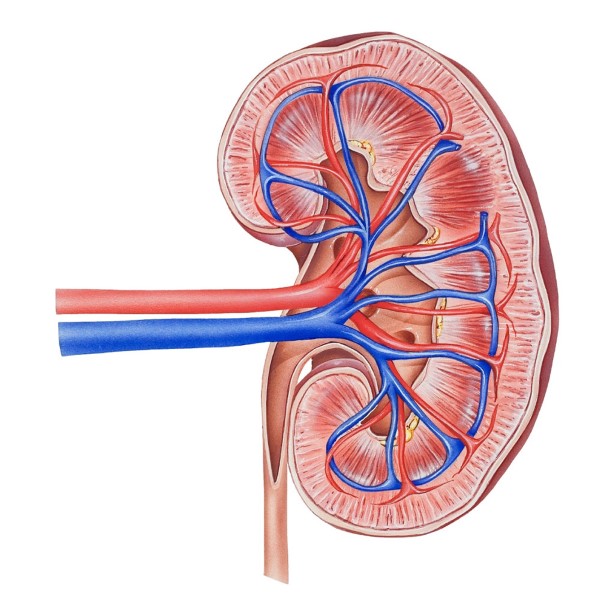 How do your kidneys work?

Depending on your weight, you will have about 4.5-6.5 litres of blood constantly circulating around your body. When your body has taken the nutrition it needs from your food and drink, some waste products go back into your blood. The renal arteries carry this blood into your kidneys, where it is filtered through about one million microscopically small nephrons. Your blood then leaves your kidneys through the renal veins, while waste and excess water that have been filtered out leave the kidneys through the ureters, as urine, are collected in the bladder and excreted through the urethra.

About 1,500 litres of blood pass through your kidneys every day. Most kidney diseases occur when the nephrons lose their ability to filter and dangerous levels of fluid and waste products can build up.

Have you ever wondered what some of those technical terms mean? Well, help is here...

Access = a method of gaining entry to the bloodstream so that dialysis can be done. A fistula is one form of access for haemodialysis.

Anaemia = a shortage of red blood cells, which leads to symptoms such as weakness, breathlessness and reduced energy. It can be improved with iron and Erythropoietin.

Antigen = a type of protein that is found on the outer surface of the body's cells.

Artery = a blood vessel that carries blood from the heart to the rest of the body.

Bladder = the organ where urine collects before being passed out of the body.

Blood cells = the microscopic cells that make up the solid part of the blood. There are three main types: red, white and platelets.

Blood group = a classification system based on hereditary characteristics of the blood ie: whether or not a person has certain antigens on their cells. There are four main blood groups: A, B, AB and O.

Blood pressure = the level of pressure that the blood exerts against the walls of the arteries as it passes through them.

Bone marrow = the soft part in the middle of some bones, where blood cells are made.

Cadaveric transplant = a transplant kidney that has been removed from a person who has died.

Calcium = a mineral salt that strengthens the bones.

Catheter = a flexible plastic tube used to gain access to the interior of the body.

Cholesterol = one of the fat levels in the blood stream - a high cholesterol value is a risk for getting heart diseases or strokes. Diet and drugs can reduce levels of cholesterol.

Chronic kidney disease is a long-term condition where the kidneys do not work as well as they should. It can be caused by other conditions like high blood pressure, diabetes and high cholesterol that put a strain on the kidneys. Often it is the result of a combination of different problems.

Creatinine = the waste substance that is produced when muscles are used. Measuring the creatinine level in the blood gives an indication of how well, or poorly, the kidneys are working.

Dehydration = a condition which arises when there is not enough water in the body to enable it to function properly.

Diabetes = a disease which causes a high glucose level and can cause kidney failure - this develops in about 20% of all patients with diabetes.

Dialyser = the filtering unit of a dialysis machine. The dialyser removes waste products and excess water from the blood.

Dialysis = the artificial process by which waste products and excess water are removed from the blood, used when the kidneys are no longer able to perform this function adequately.

Dialysis Fluid = the liquid into which waste products and excess water are passed during dialysis.

Diuretic drugs = the medical name for water tablets, which increase the amount of urine that is passed.

Donor = the person (living or dead) who donates an organ to another person.

Dry weight = an estimate of the body weight without any excess fluid in the lungs or in the tissues.

EPO = the abbreviation for Erythropoietin.

Erythropoietin = a hormone that stimulates the bone marrow to produce red blood cells. It is produced by healthy kidneys, but can be administered as an injection when the kidneys fail.

Fistula = a surgically enlarged vein (usually located in the wrist or elbow) that provides access to the bloodstream for haemodialysis.

Fluid overload = a condition in which the body contains too much water, caused by drinking too much, or not losing enough.

Glomerulonephritis = a painless inflammation of the filtering part of the kidneys (the glomerulus) - this leads to high blood pressure and progressive loss of kidney function in some cases. There are many different types and they are diagnosed after a kidney biopsy - treatment with anti-inflammatory drugs such as steroids may be used to reduce the kidney damage.

Glucose= a type of sugar. It is the main substance of peritoneal dialysis fluid.

Haemodialysis = a form of dialysis in which the blood is cleaned outside the body by a machine which passes the blood across a filter.

HD = used as shorthand for haemodialysis

Haemoglobin = the substance in red blood cells that carries oxygen around the body.

Hormone = a substance that acts as a chemical messenger in the body, controlling various body functions.

Ideal body weight = a term describing the weight that people are expected to weigh based on age, sex and height.

Immune system = the "defence" system that protects the body from infections and foreign bodies.

Immuno-suppressant drugs = drugs used to make the immune system less effective, so that a transplanted kidney will not be rejected.

Malnutrition = loss of body weight, usually due to not eating enough foods that provide Protein and energy.

Nephritis = inflammation of the kidneys.

Nephron = the filtering unit of the kidney which performs the job of filtering and fluid balance jobs - each kidney is made up of many nephrons.

Oedema = an abnormal accumulation of water in the body. When water accumulates in the lungs, this is known as a pulmonary oedema.

Peritoneal dialysis = a form of dialysis in which the blood is cleaned inside the person's body, using the peritoneum as a filter.

Peritoneum = a natural membrane that lines the inside wall of the abdomen.

Peritoneal Cavity = the area in the abdomen that contains the stomach, liver and bowels.

Phosphate binders = medication that helps prevent a build-up of Phosphate in the blood.

Platelets = a type of blood cell that helps blood to clot.

Polycystic kidney disease = a disease which runs in families and due to a problem in kidney development which leads to enlarged kidneys full of fluid filled sacs (cysts). It does not always lead to kidney failure.

Potassium = a mineral that is normally present in the blood. Its level needs to be controlled because too much or too little can cause heart problems.

Protein = one of the major types of foodstuff found in meat, fish, dairy produce and nuts. Protein is what makes up muscle and its breakdown products are got rid of through the kidneys.

Pulmonary oedema = build up of fluid in the lungs which causes breathlessness, particularly when exercising or when lying flat.

Pyelonephritis = a painless inflammation of the part of the kidneys in between filtering units. It can be caused by repeated infections, drugs or a variety of other causes.

Recipient = a person who receives a Transplant organ from a donor.

Rejection = the process in which the body's immune system recognises a transplanted kidney as "foreign" and tries to remove it.

Renal = related to the kidneys e.g. renal failure = failure of the kidneys.

Satellite Haemodialysis Unit = a unit that is located away from the main hospital renal unit.

Semi-permeable = describes a membrane that will allow some but not all substances to pass through it.

Tenckhoff Catheter = a tube (capped off when not in use) which allows dialysis fluid to be put into and removed from the peritoneal cavity.

Tissue Type = a set of inherited characteristics that are present on the surface of tissue cells.

Transplant = an operation in which a new organ (such as a kidney) is given to the recipient.

Ultrafiltration = the removal of excess water from the blood.

Under-dialysis = not having enough dialysis.

Urea = one of the waste products that build up in the blood. The levels of urea in the blood can be measured to give an indication of how well, or poorly, the kidneys are working.

Ureters = the tubes that carry urine from the kidneys to the bladder.

Urethra = the tube that carries urine from the bladder to the outside of the body.

Urine = the fluid produced by the kidneys. It consists of excess water and the toxic waste products from food.

Veins = blood vessels that carry blood from the body back to the heart.

Kidney failure
Two of the most common factors for kidney failure are diabetes and high blood pressure
Can you prevent CKD?
Chronic kidney disease is a severe disorder that has become increasingly common worldwide
Stages of CKD
Chronic Kidney Disease, CKD, occurs when you suffer from loss of kidney function over time